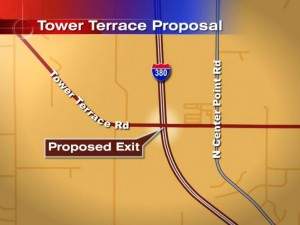 The initial funding scenario for the state’s next five-year highway plan to be presented in draft form next month includes $15.4 million for construction of the long-awaited I-380/Tower Terrace Road interchange.

Iowa Department of Transportation (DOT) staff have recommended in the scenario that the interchange receive the funding in fiscal year 2020, according to Stuart Anderson, director of planning and programming for the DOT. He said the scenario has been reviewed by the Iowa Transportation Commission at three workshops in preparation for the May 9 release of a five-year transportation program for public comment. A final plan will be up for consideration when the commission meets June 9 at the Coralville Marriott.

The Tower Terrace interchange has been pursued by Cedar Rapids metro transportation planners as a way to take pressure off the I-380/Boyson Road interchange, but it’s also key to making Tower Terrace Road a major east-west arterial across the metro area from Hiawatha to Marion. Mr. Anderson said the initial funding scenario also proposes funding for ramp improvements at the Boyson/I-380 interchange in 2018 to reduce traffic congestion.

Among the investments the interchange’s construction could unlock are a Hy-Vee Store proposed about five years ago for Tower Terrace Road and C Avenue NE in Cedar Rapids.

The city of Marion is also getting close to completing construction of Tower Terrace Road to its western city limits in anticipation of providing residents with better access to I-380 and stimulating development on the city’s north side.

“It’s good news for all the cities — Robins, Hiawatha, Marion and Linn County,” said Jon Dusek, chairman of the board of the Hiawatha Economic Development Corp. (HEDCO) and co-owner of the Tower Commerce Center, a 57-acre business park located on Tower Terrace Road. “Everybody’s paddling the same canoe on this.”

Mr. Dusek said the dangers of traffic backups onto I-380 from the Boyson Road interchange are apparent to anyone who visits the interchange at peak commute times, and that Boyson Road is a two-lane road that wasn’t designed to carry heavy traffic volumes. He said Tower Terrace Road, by contrast, is being designed as a four-lane arterial with a median strip to reduce turning movements that slow traffic.